Blog PHP Programming Hacks That Will Make Your Life Easier

PHP Programming Hacks That Will Make Your Life Easier 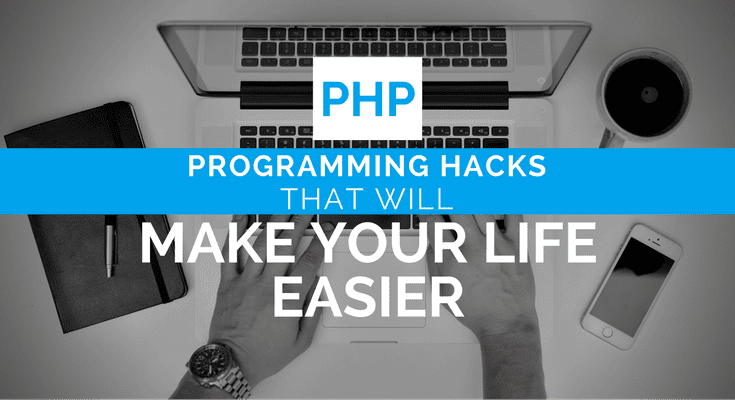 In PHP programming, just as in life there is often more than one way to skin a cat. Inexperienced programmers, and even certified PHP programmers often go about things the long way, oblivious to the fact that there’s a shortcut that will achieve the same result easier with less code. In this article we will take a look at a few programming hacks that will make your life easier.

There are many short alternatives to using if statements in PHP. One of them is assigning a value to an array based on a certain condition. This could be done using a traditional “if” or even “switch” statement. However, there is an alternative way to do the same in one line.

In this example we check if a user has sufficient permissions to post on a blog. If not, an error is stored in the $errors array.

// Create a new user object and disallow making new posts on a blog.
$user = new stdClass();
$user->name = "John Doe";
$user->isAllowedToPost = false;
// Save all errors in an array if any occur.
$errors = [];
// Because the user is not allowed to post (the first condition results in false), the $errors array is populated with the first error that occurred.
$user->isAllowedToPost or $errors[] = "User not allowed to post here.";

You could continue the code by checking if the errors array has one or more errors in it. If it does, show an error message to the user telling that an error has occurred and the blog post was not submitted. Then you could loop through the array of errors with a foreach loop, displaying all the error descriptions in a list.

There are many more use cases for a conditional expression like this. You could for example use it in API calls. If the API is designed to return true when a call is successful, this could be a handy way to generate an error if an API call is unsuccessful. What is great about this technique is that you can do it all in a single line of code.

“A valid variable name starts with a letter or underscore, followed by any number of letters, numbers, or underscores.” This is what the official PHP documentation has to say about variable names. While this is true, variable names are not limited to just these. Did you know it is possible to use dashes in variable names? Many other special characters (@, /, ! etc.) are supported too. All you have to do is to surround these special variables with curly brackets and quotation marks.

Sometimes you may have to convert an array into a PHP object. There are multiple ways to achieve this, but the easiest way is to cast the array into an object.

Now that the array is converted into an object, $object->fruit1 prints out “banana” just as you might expect.

This may be useful if you want to use containers in a more object-oriented way. Now you can easily echo data inside a string without concatenating multiple strings together. Remember to use double quotes for this.

Merging multiple separate arrays into one big array in PHP is often done with the built-in function array_merge(). However, there is an easier way to do it: using the addition operator (+).

“Variable variables” is a rarely used feature that you can use to create variables dynamically. In the example below, we create a new variable. The name of the variable depends on what is passed in as a POST request.

// Let's assume we pass in "user1_" in the post request and store this in the $prefix variable.
$prefix = $_POST["prefix"];
// Use variable variables to dynamically create a new variable.
${$prefix . "name"} = "John Doe";
// We can now use the variable like a normal variable.
echo $user1_name;

Remember to use quotes when creating the variable (put “name” in quotes) in the above example. It also works without quotes but produces an error of type E_NOTICE if you leave them out.
It is recommended to use variable variables sparingly because they often make code more difficult to read and more prone to errors.

Error reporting can be globally disabled with the error_reporting() function. This will disable errors for everything on the document. If you want to explicitly ignore errors for a single function, you can use the @ symbol in front of the function or expression.
Let’s take a variable declaration from the previous example:

By default, this produces an E_NOTICE error. As a temporary workaround it is possible to add the @ symbol in front of the expression:

Suppressing errors is not the best way to solve issues, but if you want to ignore a single error that is filling up your error logs, this might be an ideal temporary solution until you have time to fix the root cause of the issue.

Here is another easy trick with arrays in PHP. You can automatically fill an array based on what checkboxes a user has checked in a form.
First create an HTML form that has checkboxes:


When the form is submitted, all checked items are sent via a GET or POST request as an array. For easy access to the selected items, we can save them in a variable. This is all you have to do to save the values of selected checkboxes:

Email validation is a common task in PHP. Did you know there is a built-in filter for data validation in PHP? A function called filter_var() can be used to filter and validate many types of data, such as emails, IP addresses, MAC addresses and URLs.
The filter_var() returns the same data it has been given if the validation is successful. If the validation fails, it returns false. In the following example we validate an email address and print out the results.

So there you have it, a few hacks that you can add to your PHP programming arsenal for your next project…and the one after that. In PHP there’s almost always different ways to achieve the same result, so don’t rest on your laurels, keep learning how to.minimise excess code to become a better web developer.

Article by Michael Green
Founder of CancanIT, Michael Green, is an advanced web developer with over 16 years experience in the industry. CancanIT offer professional certification
for both front-end and back-end web development.

This site uses Akismet to reduce spam. Learn how your comment data is processed.

7 Ways To Use Social Proof to Drive More Direct Bookings

How to entertain & engage through storytelling

How to set SMART website goals and skyrocket your results

A few web design projects that we've completed for our happy clients recently!

More Of Our Work

Praise from our clients

Don't just take our word for it!

I started to write a more detailed thank you email to you for all your efforts, but I am terrible with words and it’s still sitting in my draft folder. You have been fantastic to work with and I really appreciate all the effort and hard work you and your team put into our website. After the launch we beat our previous monthly online sales record by a long way.

Working with Static Shift has been a great experience, through the research & development phase they really took on our business as a whole and looked to understand not only our customers, our company and our business goals but also a thorough insight into the niche industry we work in. Karl’s genuine interest in the detail translated through to the design and development and now we are loving the results. After launching our new website with Static Shift last year our organic search traffic is up 58% and enquiries 77%. This has resulted in increased net profit of over 30% and really improved our user experience as well as company growth overall. Karl knows his stuff online, and from a business perspective not only do we have more sales enquiries but the quality of our enquiries has improved as well. We continue to work with Static Shift on our SEO program and are really grateful for the partnership. They are responsive and professional and the fact that they offer web design and development with a whole business approach, is such a bonus.

Just want to thank you and your team sooo much again for all your hard work and support in building our online ticketing system. It’s so different for me not feeling stressed about ticketing issues this year and it’s so much easier for the customers to use, and us to manage, so you really have done an amazing job! Also for keeping up the communication, I really appreciate it!

Redeveloping our responsive website has been a smooth, reliable and successful venture working with Karl at Static Shift. The communication from Karl and Karen was regular, detailed and clear. The resulting website exceeded all expectations. The website is running smoothly and much more efficiently than our previous design and is a lot easier on our server resources (which was a big problem with our level of traffic). Karl has a can do attitude, which means that all custom changes that we wanted were implemented to achieve the result we were looking for. We would definitely recommend using Static Shift.

I got everything that I expected and much much more! My subscriptions to the page have increased by 400%, my SEO is always increasing and the feedback that I receive from current clients and new clients is nothing but exceptional!

The team got straight to work; their patience with our indecision about how we wanted the site to look was very appreciated. Karl often giving great advice on getting the best conversion rate possible. We are very grateful to have come across Static Shift, the team’s ongoing help and support has been amazing, they are always quick to respond with any concerns or queries. Thanks Karl and the team for your ongoing support, you really have been outstanding!